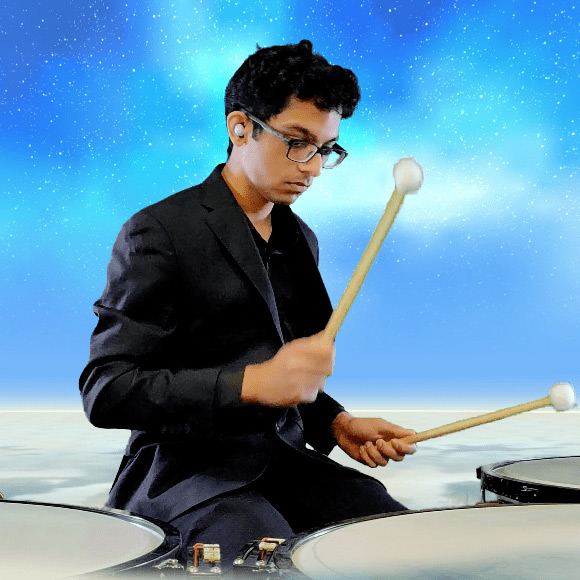 Hailing from the city of Chennai, India, Classical percussionist Rahul Vanamali has been an active performer for over twelve years.

Rahul’s vast array of performance experience has seen him share the stage with a number of prominent Indian musicians. These include a fusion concert with the legendary mridangam player Dr. Umayalpuram K. Sivaraman at the Chennai Music Festival in 2014, as well as with Oscar- and Grammy-award winner A R Rahman, with whom he appeared on Season 6 of MTV Unplugged (India), as well as the Amazon Prime-exclusive documentary Harmony.

Rahul was also a member of the 2017 edition of the South Asian Music Residency, and collaborated with artists from all over Asia and Germany. He has played drums in the jazz group The East Wind Quartet at the 2018 Madras Jazz Festival, India, in addition to performing as both a soloist and with his progressive rock band Quadrophobia at the 2019 Fête de la Musique, Chennai, India.

Rahul’s performance experience in Canada spans many performances with McGill’s Symphony Orchestra – with the most recent one being at Montréal’s Maison Symphonique in April 2022 – and McGill’s Percussion Ensemble, with whom he performed at the 2020 and 2022 editions of the Percussive Arts Society Days of Percussion Festival, featuring as a soloist at the latter. Performances outside McGill include Tchaikovsky’s Nutcracker at a ballet school in Sherbrooke City, as well as arrangements of popular video game themes with L’Orchestre de Jeux Vidéo in Montréal.

Rahul is also active as a session artist, having participated in projects with the Collectif à Contresens, an Indo-French songwriting collaboration that produced the album No Parking, as well as recording drums for the 2016 and 2018 editions of the Indie100 IndiEarth project. In Chennai, Rahul also wrote original music with his progressive rock band Quadrophobia, frequently performing around the city with his band.

Other projects Rahul is involved in include regularly arranging video game music for percussion that he produces for his YouTube channel. This has seen him collaborate remotely with a number of musicians, in addition to working on album releases of video game arrangements.

Rahul began studying drum set at the age of five and started to learn mallet percussion soon after. He has a Diploma in Performance from KM Music Conservatory in Chennai, India, affiliated to Middlesex University, London. In May 2022, Rahul received his Bachelor of Music degree in Percussion Performance from the Schulich School of Music of McGill University in Montréal, Canada, graduating with a GPA of 4.0, an Outstanding Achievement in Percussion and on the Dean’s Honour List.